Products of the hive – Lip Balm

In addition to honey, a beehive can provide other goodies like wax, pollen pellets and propolis.  With a top bar hive, you get wax when you harvest the honey.  In a Langstroth hive, the honey is spun out of the honeycomb and the comb is reused.  It takes a lot of effort for the bees to make wax for the comb and some would argue that the top bar method is a strain on the bees.   Others (like me) argue that reusing wax over and over is bad for the bees because over time, pesticides build up in the comb and the cells get smaller and smaller.  It’s like vi vs. emacs – I like simplicity (vi).

From the honey harvests I did last fall, I got some wax that has been sitting in my freezer.  So today, I used some of that to make lip balm.  I had been  procrastinating because I thought it would be hard to make.  On the contrary it is a cinch to make:

Melt the beeswax in the oil in a double boiler.  Stick a spoon in the melt and then stick it in the freezer for a few seconds.  If it’s too hard, add more oil.  Too soft, add more beeswax.  Pour into lip balm tubes.  I got mine from lipbalmtubes.com.  Thanks to Rebecca at Rebecca’s Herbal Apothocary in Boulder for the spoon in the freezer trick (and the lavendar oil).

I found I could do some cool things with Picassa, so I made a label: 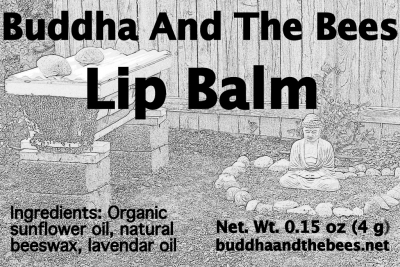 One of the things I like about top bar hives is watching the bees build new comb in thin air. I give the bees a bar with a guide on it and they work their Read more…

An afternoon with the bees

The Sanskrit word seva is usually translated as “selfless service” – work performed without any thought of reward or repayment. It’s an important part of my practice both at the ashram and in my everyday Read more…

In the bleak midwinter….

… it’s time to get ready for a new beekeeping season!  For the first time in a while, we’re having a snowy, wintery day in Colorado.  This winter has been very dry and fluctuated from Read more…